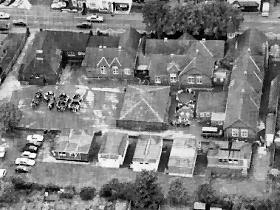 Mount Pleasant Primary School opened on 10 September 1888. The school opened on that day with just 43 pupils, but by the end of the first term there were 205 children regularly attending.

The original log books  give a clear and detailed insight into life at Mount Pleasant from its very beginning. We are pleased to present some interesting entries on this page.

The first Headmaster was Mr W E Hunt, and he remained as the Headmaster for 42 years. He was a very strict man and was not liked by many children who attended Mount Pleasant. He wrote in the log book:

I have examined the children and found that nine of them are very dull.

A past pupil, Mr A Stevens, who left Mount Pleasant in 1914, wrote down some of his memories of being at the school, particularly his memories of the Headmaster. He writes:

"Mr Hunt lived in John Street, Brierley Hill and came to school in a horse and trap. One very frosty morning, the horse slipped and fell near the school. Mr Hunt was thrown and broke his leg, which kept him away from school for quite a time. There was great jubilation amongst the children who didn't like him."

Attendance at the school was often severely hit by bad weather; heavy rain in April 1889 resulted in 70 children being absent. Other log book entries continue the theme:

Snow has fallen very heavily throughout the night and the roads are inches deep with snow and water. Attendance is low for today.

A very heavy thunderstorm passed over the district – the rainfall was excessive.

The school was also closed due to the bad health of the children.

Attendance was regularly affected by flu and scarlet fever. There is one case in the log book of a child being sent home in December 1893 as a member of her family had smallpox; a very deadly and contagious disease of the time.

Children were given 1 week off for Christmas and half a day for New Year. They were allowed four weeks off during the summer holidays but many children were away during the month of September hop picking.

The school was also closed for very special events:

School is closed all day today to mark our sense of sorrow and loss at the death of our Beloved Queen (Victoria).

A very exciting event is described in this entry:

The one topic of talk is the great zeppelin raid of last night and early this morning. Zeps passed over the district at 8pm last night and 12.30am this morning. The objective was the Brierley Hill Steel works, at which a number of bombs were directed, but fortunately missed their mark.

Entries for the period covering World War Two include:

Owing to the outbreak of war between England and Germany, all schools have been closed for another week.

Air raid shelters are now being built in the corner of the playground for the use of the infants and juniors.

Several German raiders were over the district during last night and this morning. Raids continue nightly and attendance is seriously affected.

Two air raid warnings sounded during the day. The whole of the afternoon session was spent down the air raid shelter. 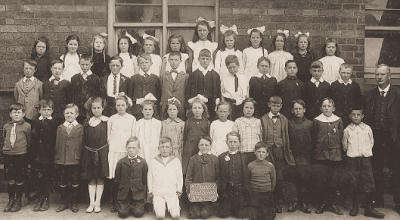 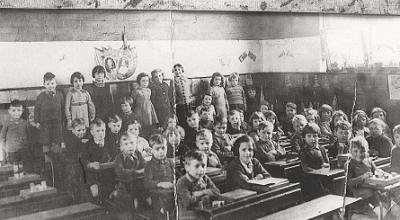 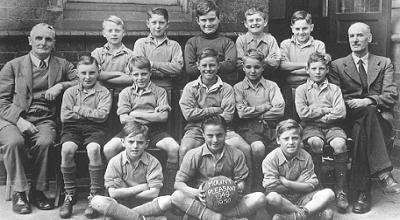 Many children were punished by being caned. This meant being hit with the cane or stick either across the hand or bottom.

The punishment book for 1932 lists: 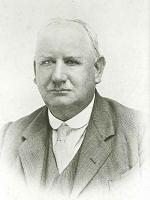 Mount Pleasant has had nine Headteachers since it first opened:

The Mount Pleasant Local History Group was formed in the Autumn of 1997 when the school's head teacher, Gail Bedford, asked local historian Ned Williams to lead a group of parents and grandparents in researching the history of the school. One aim of this was to help cement relations between the school and its surrounding community, and another was to use such research to compile a booklet that could be produced to commemorate the schools 110th birthday in 1998. Many founder members of the group had been pupils of the school - as early as the mid 1920s.

The group grew quite quickly and its interests broadened to include 'all and everything' to do with Quarry Bank. This did not prevent the completion of the group's first book: '110 Not Out' for the school's 110th birthday in 1998. From this time onwards the group generally consisted of between twenty and thirty members - some of which have come and gone, most of whom have stayed for years! The group has also benefited from many visitors who may have only come once or twice but have passed on useful information to the group. The group has also participated in many activities in the wider Quarry Bank community as well as activities at Mount Pleasant School.

In the Autumn of 1998 the group published its first book in association with Sutton Publishing and the Black Country Society. This was 'Quarry Bank in Old Photographs' and a tradition of elaborate book launches was established at the school.

One book tends to lead to another and the following year the group produced 'What's Happened to Quarry Bank?' a well illustrated A4 sized book with colour printed cover, etc, and a great deal more text than is found in the Sutton series books.

Nevertheless the MPLHG returned to Sutton Publishing for its fourth book: 'Quarry Bank: Past and Present' which appeared in 2003. Although the pace of book production has closed down, the group continued to flourish and has generally always found something new to consider when looking at the life and times of Quarry Bank. Management of the book has changed over the years and after years of working under the umbrella of the Workers Educational Association the group has now become 'independent.'

New faces are always welcome at the MPLHG whether they appear just once or become regular attenders. The only entry qualification needed is an interest in the Mount Pleasant area or Quarry Bank - past, present or future!